Does the Kiddie Tax Affect Your Family? 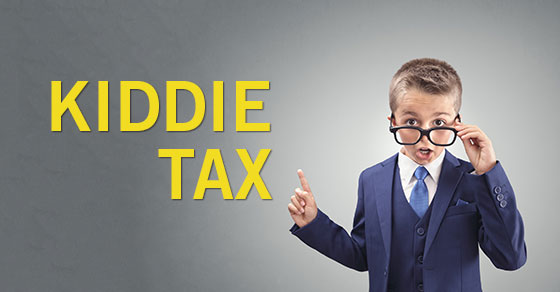 Many wonder how they can save taxes by transferring assets into their children’s names. This tax strategy is called income shifting. It seeks to take income out of your higher tax bracket and place it in the lower tax brackets of your children.

While some tax savings are available through this approach, the “kiddie tax” rules impose substantial limitations if:

The kiddie tax rules apply to your children who are under the cutoff age(s) described above and who have more than a certain amount of unearned (investment) income for the tax year — $2,300 for 2022. While some tax savings on up to this amount can still be achieved by shifting income to children under the cutoff age, the savings aren’t substantial.

If the kiddie tax rules apply to your children and they have over the prescribed amount of unearned income for the tax year ($2,300 for 2022), they’ll be taxed on that excess amount at your (the parents’) tax rates if your rates are higher than the children’s tax rates. This kiddie tax is calculated by computing the “allocable parental tax” and special allocation rules apply if the parents have more than one child subject to the kiddie tax.

Note: Different rules applied for the 2018 and 2019 tax years, when the kiddie tax was computed based on the estates’ and trusts’ ordinary and capital gain rates, instead of the parents’ tax rates.

Be aware that, to transfer income to a child, you must transfer ownership of the asset producing the income. You can’t merely transfer the income itself. Property can be transferred to minor children using custodial accounts under state law.

The portion of investment income of a child that’s taxed under the kiddie tax rules may be reduced or eliminated if the child invests in vehicles that produce little or no current taxable income. These include:

Investments that produce no taxable income — and which therefore aren’t subject to the kiddie tax — also include tax-advantaged savings vehicles such as:

A child’s earned income (as opposed to investment income) is taxed at the child’s regular tax rates, regardless of the amount. Therefore, consider employing the child at your own business and paying reasonable compensation to save taxes within the family.

If the kiddie tax applies, it’s computed and reported on Form 8615, which is attached to the child’s tax return.

Parents can elect to include the child’s income on their own return if certain requirements are satisfied. This is done on Form 8814 and avoids needing a separate return for the child. Contact an Axley & Rode advisor if you have questions about the tax.